The Top 10 Hotels in Ireland for Interiors lovers

There are so many beautifully designed hotels in Ireland that it is hard to choose one favorite! We have narrowed down our list of top 10 hotels that we think interior enthusiasts would love…

At the foot of the Slieve Bloom Mountains, Ballyfin has long been admired as one of the most lavish regency mansions in Ireland. Decorated with Irish art and antiques from around the world, the interiors offer the same spirit of refined elegance that the early house reflected in the 1820s. Each of the 20 bedrooms in the house is uniquely designed and decorated to mirror the style of the original house. The decoration of these interiors has long been acclaimed as among the finest of the Neoclassical and Empire periods in Ireland.

Each bedroom is appointed a name after members of the families who lived in Ballyfin, visited the estate, and even the architects who worked on the restoration. You will find on the website a brief description of each bedroom and the meaning behind its name, bringing to life the history of the room you will enjoy before stepping foot inside. Guests at Ballyfin will notice the house has an outstanding collection of paintings that traces the development of Irish art from the mid-seventeenth century to today. The result of the restoration of Ballyfin allows guests to enjoy the lavish estate in the same spirit of refined elegance as visitors to the house did in the 1820s when Ballyfin was built. 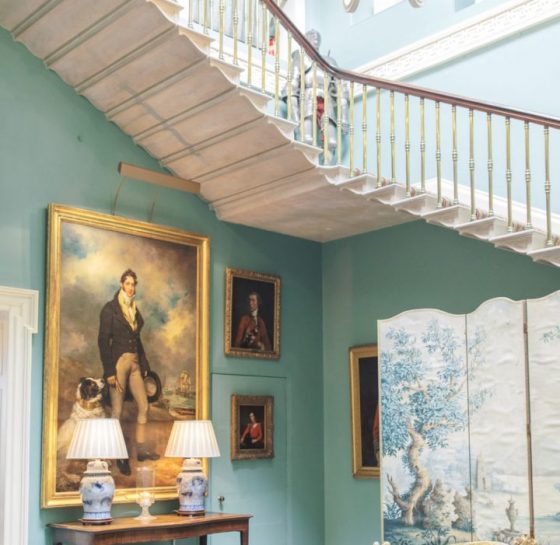 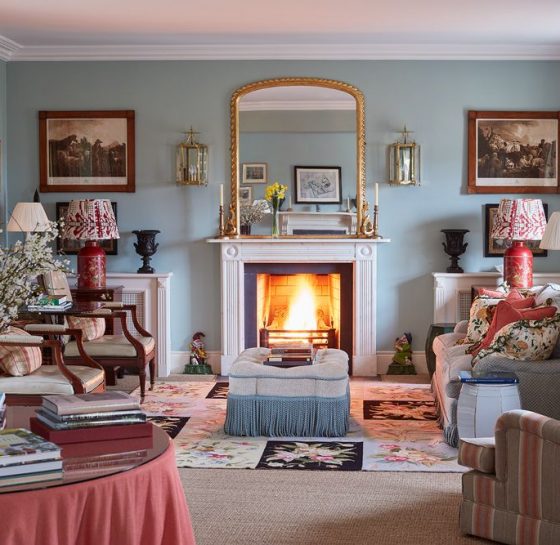 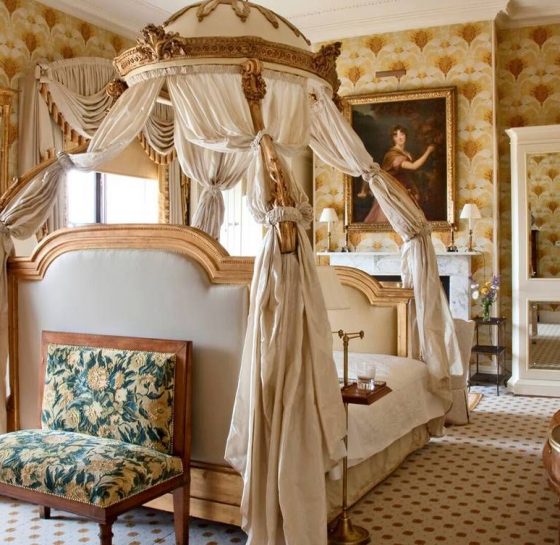 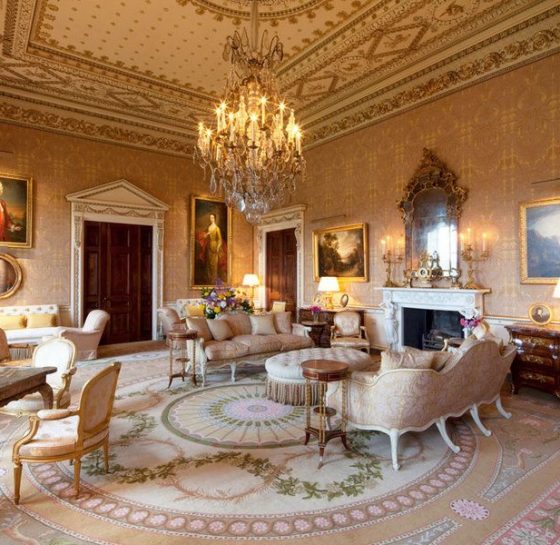 Originally constructed in 1839, The Wilder Townhouse is a Victorian townhouse boasting 42 uniquely decorated bedrooms.  The beautiful red brick was once a “Home for Retired Governesses” and there is also a historical reference to it being a “Home for Bewildered Women.” No two bedrooms are the same as each is unique in size, shape, and colour. The rooms are individually furnished with minimal but functioning pieces such as wingback chairs, a tailor’s dummy for jackets and coats, and a fireplace.

The Garden Room, which is where guests have breakfast and dinner, features bold botanical wallpaper. The Gin and Tea Rooms feature darker colours mixed with mustard yellows and velvet. The Wilder Townhouse tastefully encompasses Victorian heritage through Art Deco and contemporary inspirations. 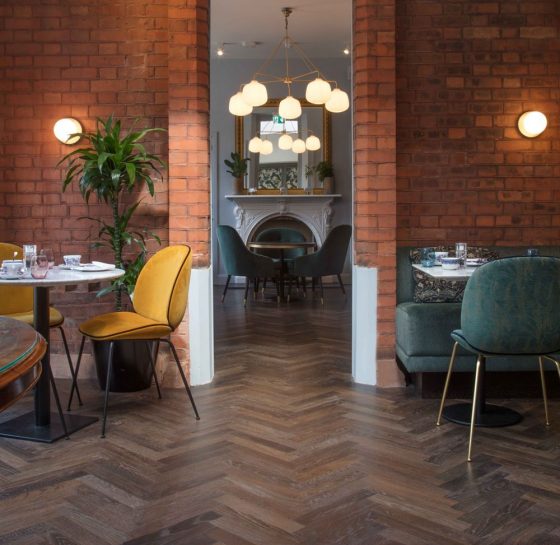 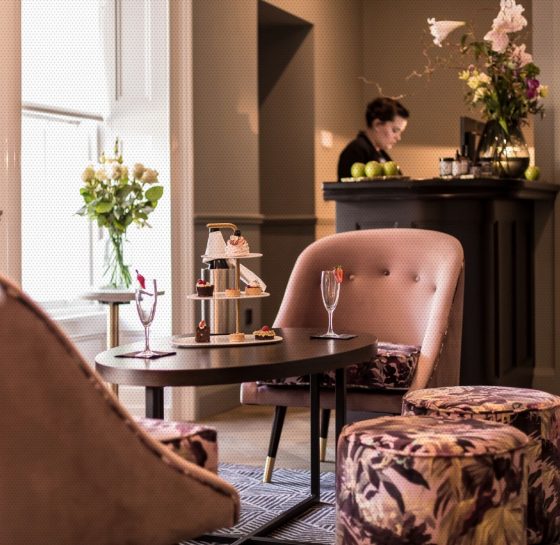 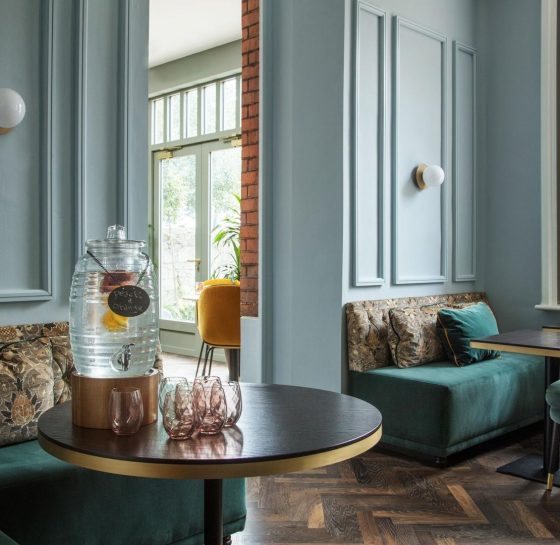 Upon stepping into Ashford Castle, one immediately feels as if they have stepped back in time. The main foyer leads into the Oak Hall which is aesthetically decorated with dark reds, a glowing Waterford Crystal chandelier, and dark wood paneling. Following the Oak Hall is the Connaught Room which is a contrast to the dark reds and boats soft blues and yellows with lots of natural lighting.

Each bedroom is individually decorated with unique character and charm. The rooms décor combines the castle’s original features with the latest modern luxuries. Careful attention to detail can be found in the unique works of art, carefully sourced antique furniture and sumptuous fabrics with custom-designed carpets, bespoke beds, feature lighting. Bold matching wallpaper to the bedspreads can be found in some of the rooms. Interior lovers who are looking for where the old meets the new will love Ashford Castle. 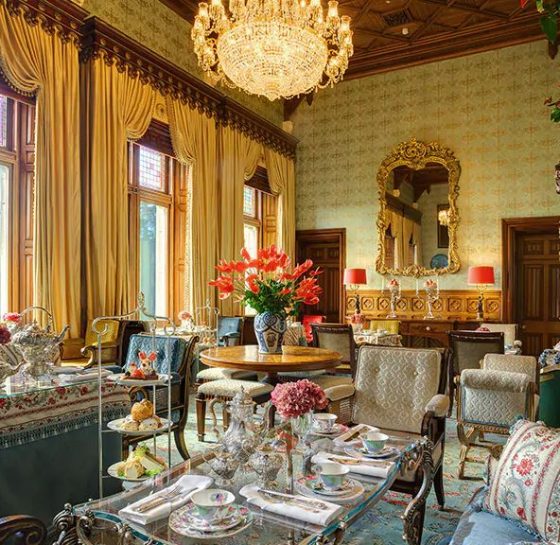 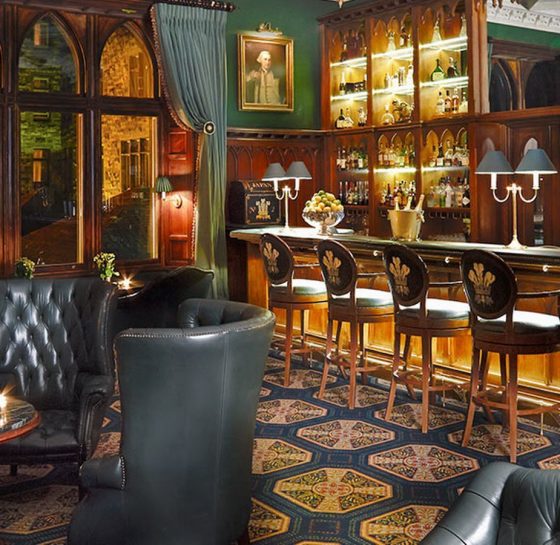 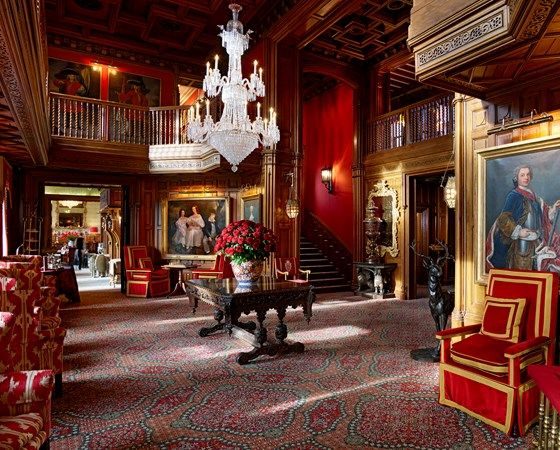 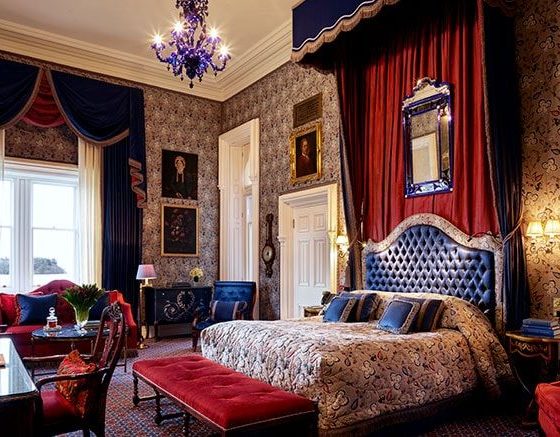 The Cliff at Lyons is an idyllic oasis that is hard to imagine it is so near to the hustle and bustle of Dublin city. The history of the hotel dates to the 16th century. The buildings that form today’s 16-acre Cliff at Lyons evolved into a village in the 1820s. “The grounds and the exterior are beautiful, almost like out of a novel,” said Elizabeth Doerfler, who was a 2019 Ireland Chauffeur Travel client. The hotel occupies a collection of historic village houses, barracks, forge and mill situated on the Grand Canal in Kildare.

The bedrooms on the property are all eloquently furnished blending old and new Irish traditions. There are Estate Rooms and Lily Pond Rooms. The Lily Pond Rooms are near the beautiful fountain-dappled water feature that sits at the heart of the property. The Orangery Restaurant, located on the estate, is one of the most unique and beautiful restaurants in Ireland. The restaurant features a domed ceiling topped glasshouse. A large fig tree dominates the one stone wall in the restaurant. This nature and botanical theme felt throughout the restaurant inspire the dishes that are offered on the menu. The Cliff at Lyons eloquently combines contemporary luxury in a lovingly restored Georgian setting. 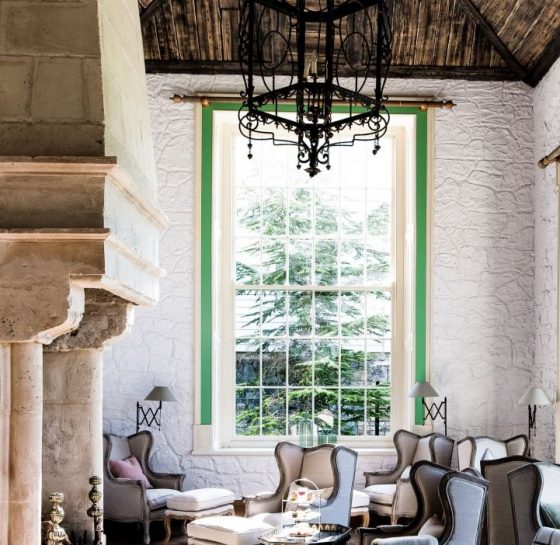 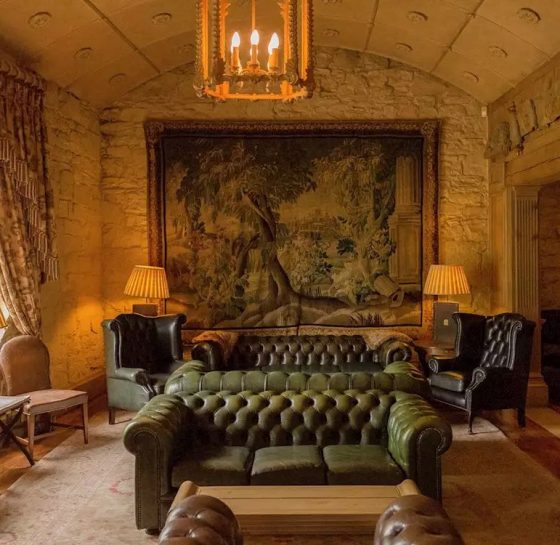 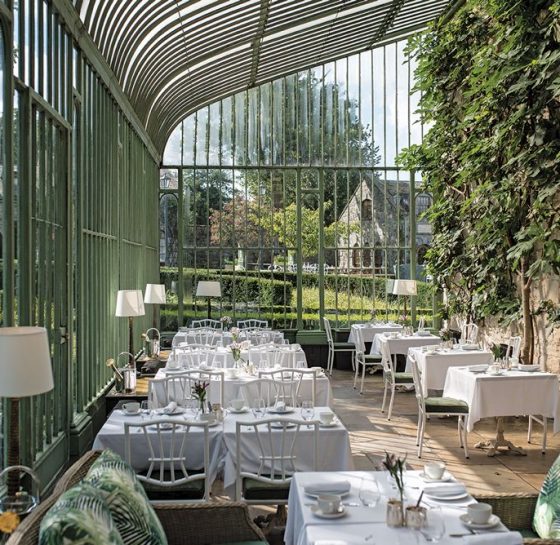 The Merrion Hotel consists of 4 Georgian townhouses, beautifully restored and equipped with all the modern amenities. The elegantly simple and dignified exterior of the Georgian architecture provides a wonderful arrival for guests. The hotel is home to Ireland’s largest privately owned Art Collection. Across the street from the hotel is the National Gallery of Ireland and the Natural History Museum which the hotel has creatively tied into the offerings at the hotel. The Merion offers a special Art Afternoon Tea which is inspired by some of the paintings that hang in the hotel’s collection.

The Garden Wing of the hotel is where traditional meets contemporary. The Garden Rooms either has a street view or overlooks the garden in the middle of the property. The garden views offer a sense of calm that makes you forget you are in the middle of a bustling city. The rooms are decorated with a gentle palette of soft blues and pale grays inspired by the landscape paintings of renowned Irish artist, Paul Henry. Paul’s paintings can be found in The Merrion’s art collection and around the hotel.

The Main House of the hotel offers a more traditional style. The original rooms have been restored and decorated with fabrics and furniture in keeping with the architecture and interiors of the original 18th-century townhouses. Vaulted ceilings and original marble fireplaces are just some of the features you will find in the Main House Rooms. 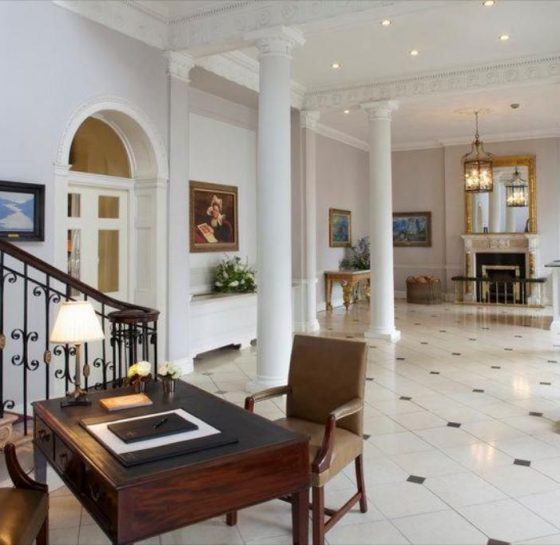 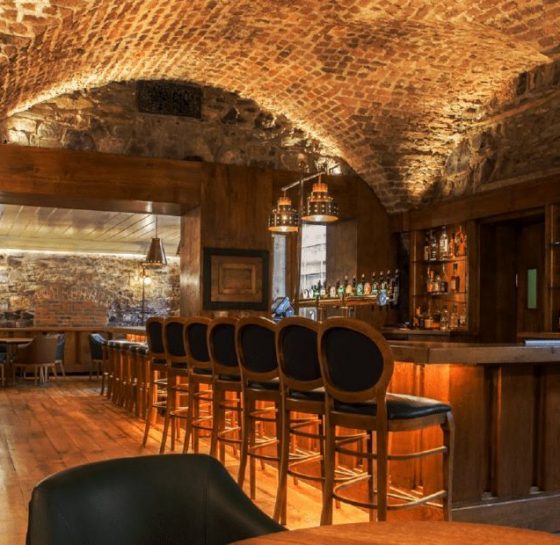 The Westbury encompasses the perfect combination of contemporary and luxury. Located off one of Dublin’s busiest shopping streets, the Westbury Hotel stylishly ties in elegancy and modern style to rival the fashion on its doorstep. The Gallery offers what other luxury Dublin hotels cannot, an ideal perspective on Dublin life, with an elevated view of Grafton Street and over €1m of Irish art on display. This space offers inviting soft tones of pink and green with art deco-inspired furniture.

The bedrooms are tastefully decorated with greys and whites with a small touch of a bold pattern and color. These rooms offer a sense of tranquillity and calm in the middle of a busy section of the city.  The Wilde Restaurant is a key feature of the hotel. The space embodies character inspired from 1930’s elegance with an abundance of greenery and light colors creating the sense of alfresco dining. The Sidecar is creatively designed in a stylish and elegant way to provide a modern take on a 1930’s cocktail bar. 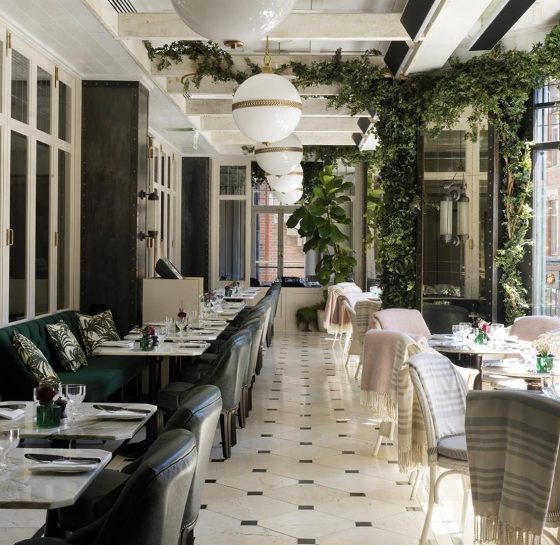 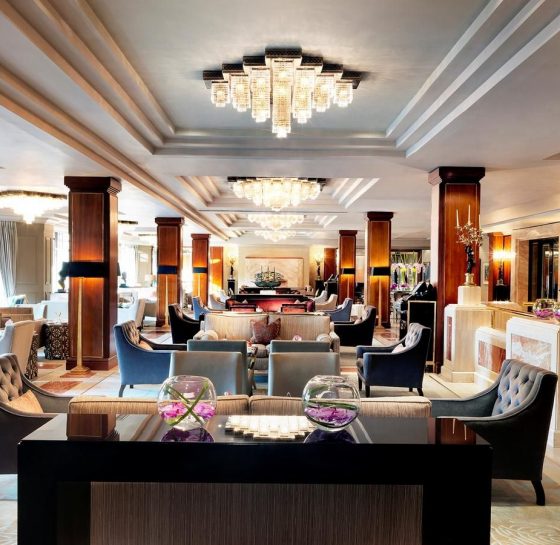 The first striking feature that stands out about the newly refurbished Alex Hotel is on the exterior of the building. Especially in the evening time or as the sun is setting, the exposed light bulbs on the overhang outside are flashy but in a swanky and modern way. This feature provides the impression that the hotel’s interior will be parallel in style. The Alex Hotel radiates a chic and luxurious design in the foyer area. In addition to the reception desk, the public spaces now include a workspace and the hotel’s own takeaway coffee stand.

A tasteful and calm palette of dusty pinks and green velvet runs through the bedrooms and public spaces. The Alex’s stylish bar offers a relaxed vibe in a stylish setting. Stunning décor and luxurious features can be found throughout each bedroom. The hotel tastefully ties in artwork from local artists and bespoke furniture and fittings predominantly made by Irish craftsmen. 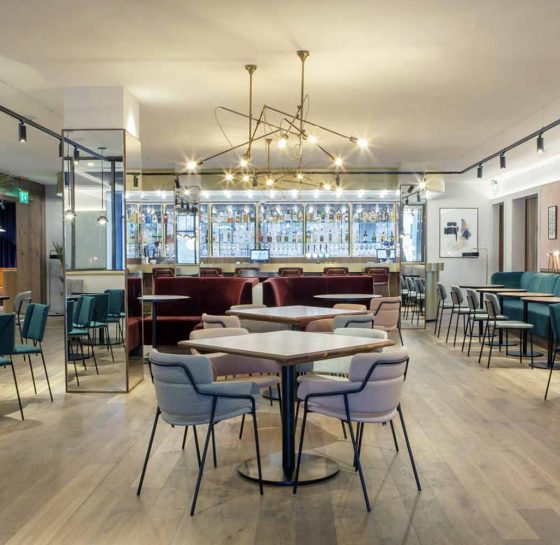 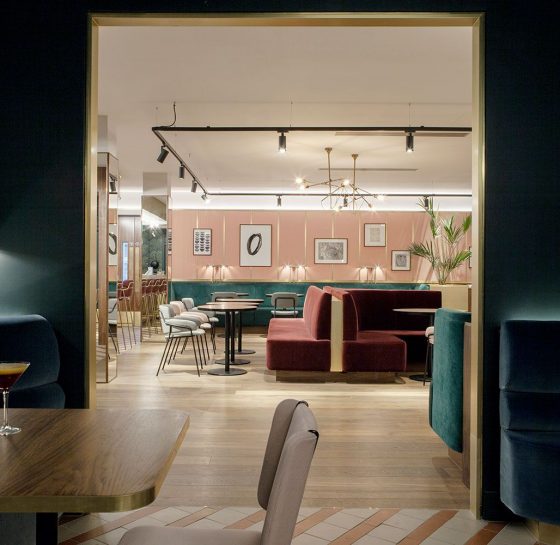 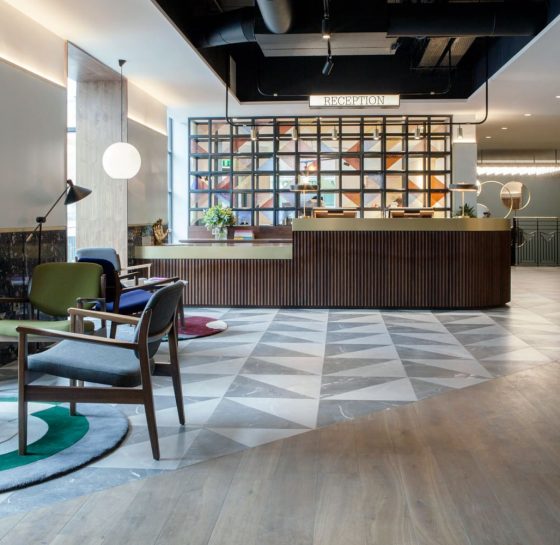 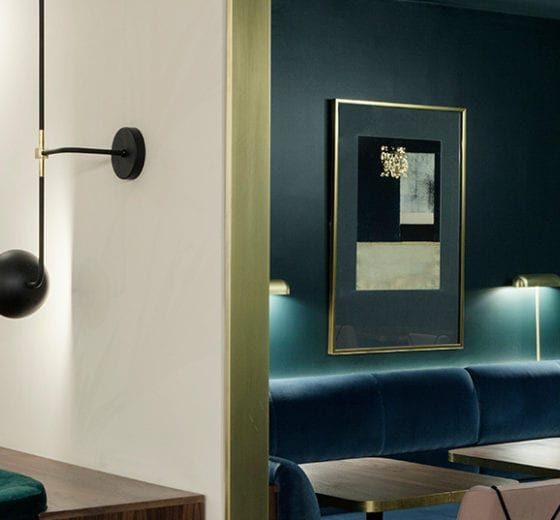 Nestled in the foothills of the Twelve Ben Mountains, Ballynahinch Castle’s striking castle exterior rivals the traditional luxury found in the interior. Antiques and vintage pieces help accentuate the historical character of the inside spaces. The bedrooms are decorated with tonal palettes which helps emphasize the natural lighting and maximize the beautiful views of the river and hills found outside the castle. Each one is uniquely different in size and shape. Most of the Classic rooms are located in the original house where the remaining Superior, Luxury rooms, and Riverside Suites are located in a newer wing.

Ballynahinch Castle stands proudly overlooking its famous salmon fishery. The Fisherman’s Pub and Ranji Room uniquely ties in fishing to the interior decorations. Guests in the Pub are surrounded by records and images of past fishing exploits and join in the celebration of anglers returning in triumph with their salmon to weigh and record. The hotel does a great job of tying in the rugged outdoor landscape of Connemara in an elegant and charming way with the interiors. 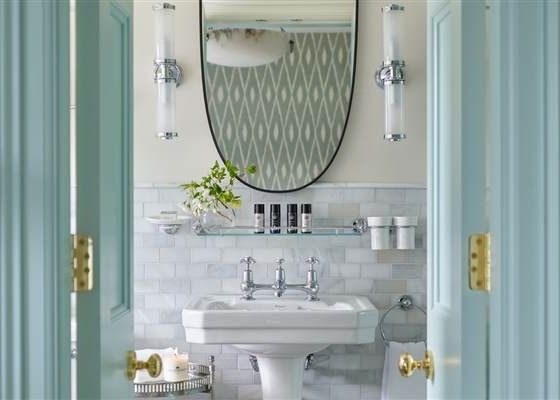 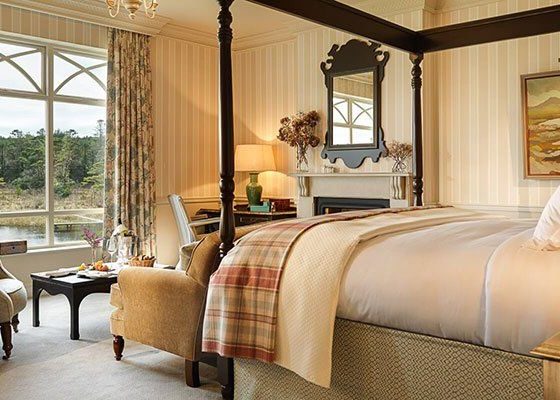 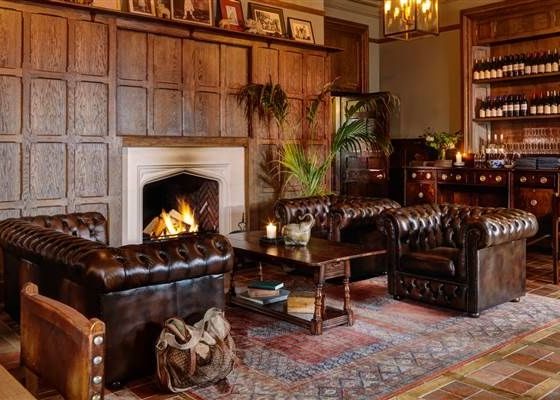 As one of the finest 5-star hotels in Belfast city, The Merchant Hotel is located in one of the most historic buildings in the city. Built in 1860, the exterior of the former Ulster Bank building is Italianate in style, a popular feature of High Victorian Architecture.

The Great Room Restaurant, located in the hotel, is not only one of the finest restaurants in Belfast but also has the most luxurious interiors in the city. The restaurant has a glass cupola and Ireland’s largest chandelier. There are three different bedroom categories named the Art Deco Rooms and Victorian Rooms & Suites. Each category is uniquely decorated based on its selected name. The Art Deco-inspired rooms offer the very best of the Art Deco period presenting a sleek and bold contrast to the Victorian approach. The Victorian Rooms are furnished with silk curtains, bespoke furniture, and period works of art that complement these gracious high-ceilinged rooms bringing each guest back to this classic era. 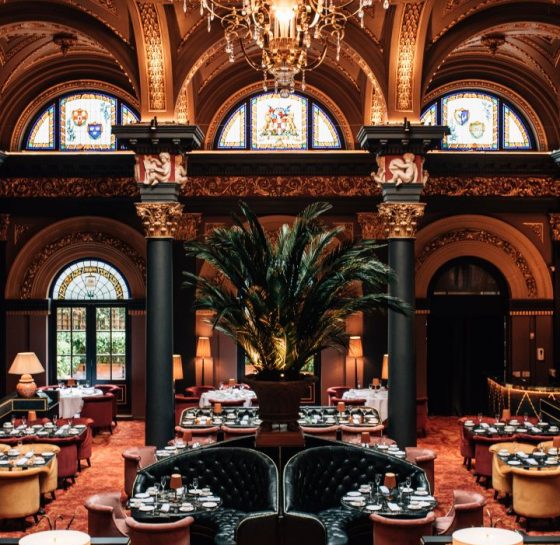 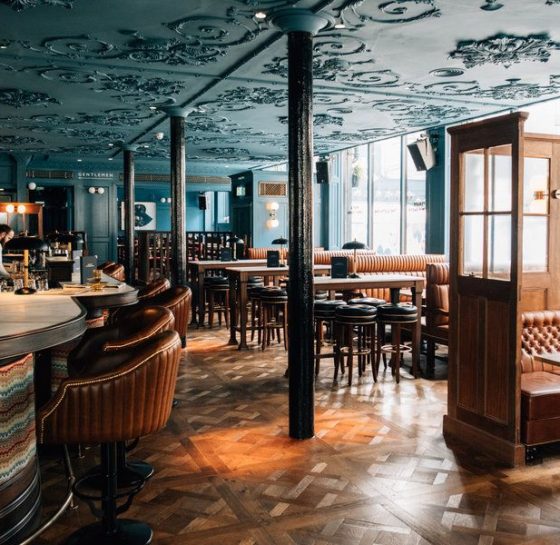 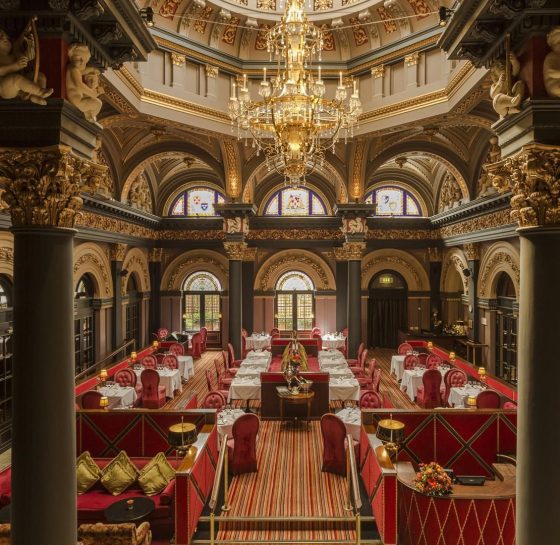 Enquire now about your next Trip to Ireland